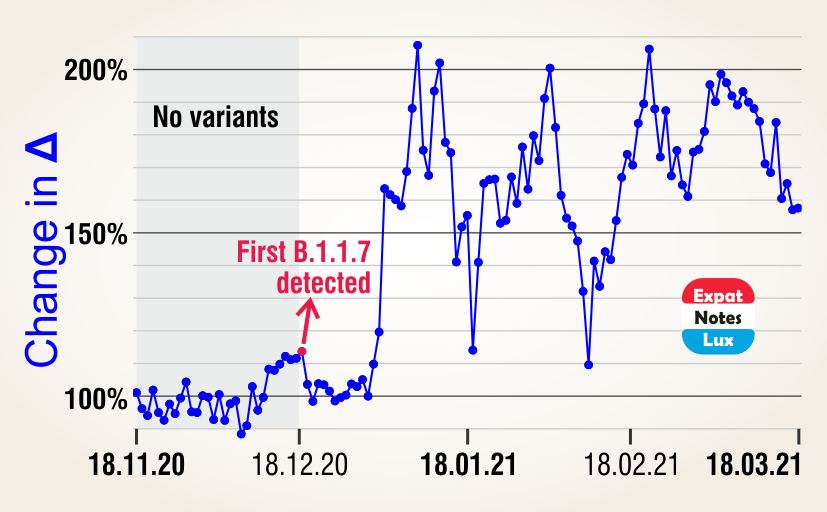 So mutations happen randomly, then why the ‘UK variant’ is special?

As mentioned in the beginning (page 1) that the random chance of a copying-error during replication process (RNA to RNA, incorporation of a wrong nucleoside, also known as a mutation) is very small and when translated (RNA to protein), some of these ‘mutations’ can lead to a different amino-acid (we have 20 different amino-acids). Such changes are rare but since the amino-acids differ in sizes and charge, they effectively lead to ‘localized‘ changes in the protein. As proteins are essentially a three-dimentional arrangement of a long chain of amino-acids, basically it means that if a protein is hundreds or thousands of amino-acid long, a change of one or few amino acids would-not change the overall structure but only some localized changes (for example, the SARS-CoV-2 Spike (S) protein is ~1,280 aa long).

Now comes the UK variant, also known as the B.1.1.7 or (VOC 202012/01) and amongst many other changes, one notable change is the asparagine at position 501 that has changed to a tyrosine (N501Y), and this partucular amino-acid is exposed to the ‘surface’. Interestingly, this ‘small surface’, also known as the receptor-binding domain comprising many other amino-acids and including the N501Y, couples (binds) with the ACE2 receptor protein (a surface-protein in our lungs and upper respiratory organs) and help the virus particle to invade our healthy cells. So, any change in the ‘coupling’ between the ACE2 receptor protein and the ‘receptor binding domain’ of SARS-CoV-2 Spike (S) protein would also impact how quickly or slowly the viral particle can invade our cells.

Bad luck, the N501Y mutation makes the S-protein to bind ACE2 protein a bit stronger and concequently, scientists found out that it has higher ‘transmission rate’.

Can the ‘UK variant’ get further mutated or other clades / variants emerge with higher virulance?

Probably YES and it is important to mention that the N501Y is not alone in terms of mutations which are of concern. As it happens, a small statistical chance of random mutation is not much to worry about, in nature, with millions of people infected world wide and each person acting as host with millions of cells infected in each person – and then each cell making thousands if not millions of replication of the virus, which itself is 30,000 bases long, we can easily see that the odds of witnessing a real-world mutation increases very quickly against these astranomical number of random chances. In other words, the mutations are NOT occuring at a faster pace, but since there are now more people infected around the world, and even if a very very small percentage of people can travel to new places and meet new people, and consequently give the virus to find new hosts, the virus has effectively more chances to evolve ‘quickly’. And exactly that has happened. In South Africa, a variant (B.1.351) with N501Y and two more mutations (K417N and E484K) have been found, and remarkably in the same receptor-binding domain (shown in the animaton below). In Nigeria, another variant with mutation ‘P681H‘ has been found and is located in the S1/S2 furin cleavage site (an important site which has mechanistic role in terms of SARS-CoV-2 virulance but not discussed here).

So, let us take a closer look at the trimeric spike (S)-protein from SARS-COV (orange) interacting with the human ACE2 protein (blue) and the zoom-in show the sites of the mutations.

OK, but can it effect vaccines?

YES, it is most likely expected to have an impact on vaccine effectiveness and vaccination strategies. Why? because the mRNA based vaccines (like from BioNTech/Pfizer and Moderna) are tailored to make portions of spike-proteins which mimic SARS-CoV-2 spike (S) protein and our body can create antibodies without the interference with the whole virus. And if a SARS-CoV-2 viral particle with mutated spike (S) protein infects an individual, the ‘antibodies’ following a previous vaccination may not behave to the same level of effectiveness.

Technically speaking, as we happen to have several variants of the virus currently circulating in the population, different variants would mean different effectiveness of the vaccines and importantly, it is just not one or couple of variants, there are now many more of them and hence, a vaccine effective against a plethora of variants is less likely.

So mutations are occuring that we cannot stop or control, and vaccines that are not effective against a multitude of variants, what does it mean?

There are two possibilities ahead, first, all the political and technological powers have to come together and follow through a vaccination drive for majority of population in a short period time. If not, the virus would continue to have enough hosts (humans) to infect and hence, the pandemic would continue for foreseeable future (until >70% or more of the population has been infected and/or vaccinated atleast once and hence gained some form of baseline immune defence). It would also mean that at any particular point of time, there would be one or few dominant variant(s) which would keep changing over time as ‘functional’ mutations occur/ evolve, and hence the vaccination strategies has to keep evolving too.

The second possibility is that we need to accept and learn to live with the evolving virus. It would be a continued threat all the time, even with all the hygiene and distancing measures at place, and might even require ‘strict lockdowns’ from time-to-time to contain any sudden rise of a varaint, as otherwise there is no globally effective way to minimize viral transmission any further. It is quite evident as the CDC, WHO and ECDC as the world’s topmost regulatory agencies have not yet mentioned anything other than vaccination and ‘hygiene and distancing measures’ to minimize viral transmission!

Is there any clinical evidence yet of mutations can evade vaccine response?

Novavax, a small biotech firm developing a ‘protein-based’ candidate vaccine against COVID-19 which requires less stringent cold-chain (2 to 8 °C storage and transport is much easier and helpful to reach remote parts), and currently under exploratory talks with the EU as well, reported 89.3% efficacy in Phase 3 trails in the UK (>15,000 participants, age 15-84y). Interestingly, when checked for the efficacy against ‘strains’, a 95.6% efficacy was reported against the original COVID-19 strain but only 85.6% efficacy against the UK variant strain (B.1.1.7), clearly showing that the UK variant can evade the vaccine response to certain degree.

What is more interesting is that Novavax also reported the results of the Phase 2b trails with the same candidate vaccine in South Aafrica (>4,400 participants). The overall efficacy dropped to 60%, and sequencing data show that over 90% were the South African variant (B.1.351).

Taken together, this may be regarded as first field-based clinical evidence underscoring new variants (B.1.1.7 and B.1.351) can partly evade vaccine induced immune response and pose an immidiate and imminent challenge to the current vaccinations.

In light of the new data, it is of paramount importance to direct all efforts and vaccine doses available for vulnerable people immediately. The reason behind is that Luxembourg has already confirmed the presence of UK variant B.1.1.7 and South African variant B.1.351 within its territory, and with high transmissibility of these variants, it is generally expected that these variants would increase with time, and if they can escape the current vaccination induced immune response, then Phase 1 participants remain vulnerable even after 2 doses but in contrast old people and in-risk group people would have hightened risk of getting infected. So, in terms of saving ‘life-years’, an immediate response of vaccinating the old and at-risk should take priority, even with only 1 dose (it would be much better to have partial immunity than no immunity at-all) 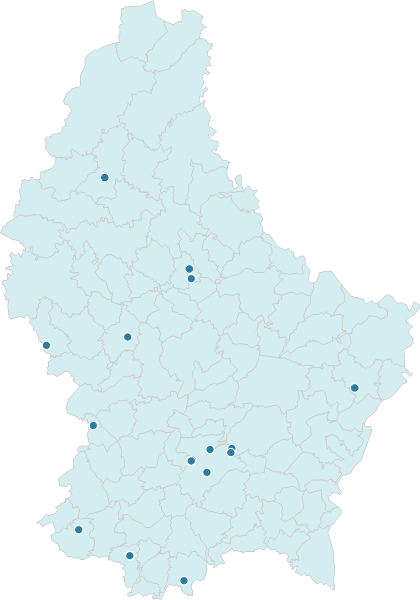 Hospitals and Other Healthcare Services in Luxembourg 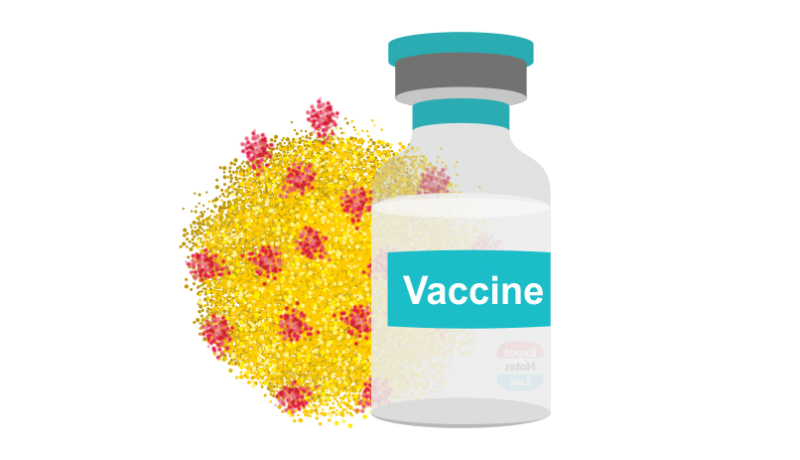 Most Common Baby Names in Luxembourg in 2020 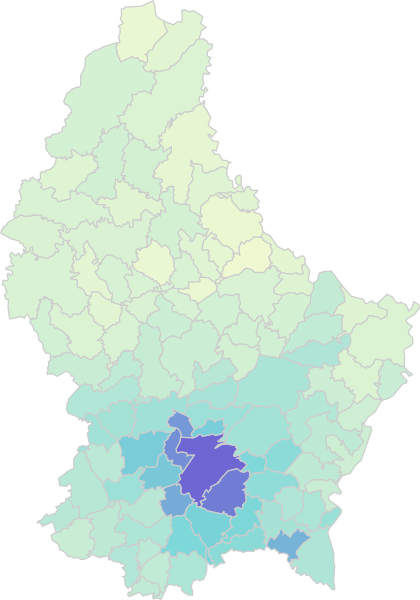